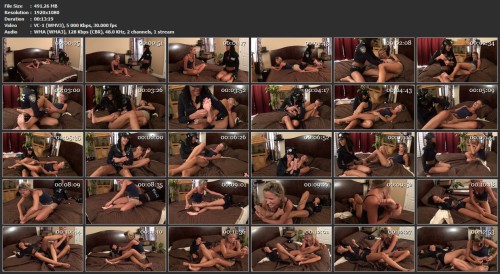 Officer Logan is snooping around Dacy's home when she finds her in her room on the phone… Danica listens in for a few seconds when Dacy speaks to her "boss." "Yea, I sold all the rocks… big money!" OH NO! "You're under arrest!" Danica informs Dacy she heard her on the phone and she's going to prison for dealing d.r.u.g.s! Dacy BEGS and PLEADS with Officer Danica Logan… Danica can think of only one thing… if she lets her tickle her she might let her off, just this once. Dacy agrees and accepts the tickle torture without fighting back too aggressively. Officer Logan tickles mainly her bare feet but also attacks different parts of this criminals body! BUT WAIT! Dacy asks to see Officer Logan's warrant! How did the officer get in the house in the first place? Danica claims she lost it on the way… but Dacy knows she could get the officer fired for this breaking and entering without and warrant!!! Dacy is willing to make a deal… if officer logan lets her tickle her in return, she won't turn her in! Danica hesitantly agrees as she flips over so Dacy can tickle torture her. After a few minutes of non stop tickling the girls agree to call it even!