TickleCentral – Dacy Does It Facing Down 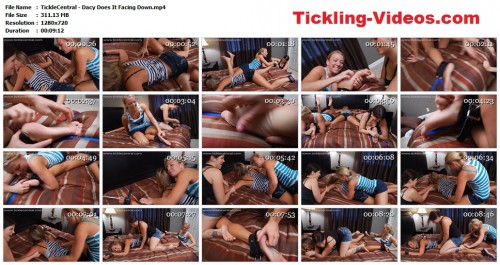 Dacy had her fun and now it's time for her to pay the price. Dre was tied face down and now Dacy must suffer the same fate! Pinned down Lela and Dre tease her upperbody just a bit to get her nice and sensitive and totally aware of what's about to happen. The girls then move down to the feet to really start in on her. Sitting firmly on the back of Dacy's leg, Dre along with Lela dig in. BOTH GIRLS TAKE TURNS RAKING THEIR NAILS ON DACY'S BARE UPTURNED SOLE MAKING HER FREAK OUT! Lela's expression alone tells you how bad it's tickling Dacy even if you couldn't see her foot or hear her laughter. Dre is vicious and without remorse as her evil smile is a clear indication of how much she's enjoying torturing Dacy and how unlikely it is that she'll be stopping soon. The girls move to the other foot. DRE PINS HER CALF UNDER HER FULL WEIGHT AS LELA'S LITTLE FINGER DESCEND ON DACY'S OTHER HELPLESS BARE SOLE DRIVING HER INSANE WITH LAUGHTER AND BUCKING WILDLY! Again the girls pair up and both rake Dacy's unprotected soles! They eventually each take a foot and tickle viciously as we watch Dacy's sexy body twist and turn trying to get away! She doesn't, at least not yet. It's not until Dre goes to her upperbody that Dacy's amazing strength and wiry nature give the girls a bit of trouble…..only a bit mind you. DRE LAYS ON TOP OF DACY AND SLIDES HER FINGERS INTO DACY'S UNDERARMS CAUSING HER TO COME STRAIGHT UP OFF THE BED LAUGHING HYSTERICALLY, FRANTICALLY! Dacy breaks free of her one wrist bond and Lela rushes to pin her arm down so that Dre may continue. Lela doesn't waste the chance to slide her tickling fingers into Dacy's underarm too! The girls switch and Lela takes charge of a retied Dacy's upperbody while Dre sits at the foot of the bed raking Dacy's bare soles. Of course, poor Lela doesn't see it coming, again, as Dre takes advantage of Lela's involvement in tickling Dacy to attack her bare soles too! Dacy welcomes the distraction but it's short lived as Lela continues her tickling even while under attack. The girls tickle her senseless, but then again when do we ever waste a chance to do that to Dacy?? 🙂