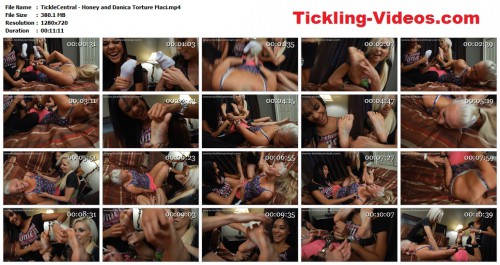 Maci's back and BOY DOES SHE GET IT BAD!!! Maci as you all know is a VERY ticklish young lady. Well up until now she's not been tickle by the very evil Danica. Add to that Honey who is herself has become one of the most evil and calculating tickle lovers around and you've got a recipe for something wonderful. Honey kicks things off with one of Maci's hogtied feet locked in an armlock as she begins to tease her socked foot. Maci is cracking up as soon as Honey touches her foot and that's with a sock on! Honey begins to remove the sock but she stops and says "I'm just going to expose your heel" and she begins to tickle just her bare heel. Honey continues her little game exposing a little more of Maci's foot each time and tickling it until she rips the sock completely off. WITH HER BARE FOOT TOTALLY EXPOSED HONEY SCRIBBLES HER LITTLE NAILS VICIOUSLY ALL OVER MACI'S TRAPPED BARE SOLE DRIVING HER CRAZY WITH LAUGHTER!! Honey is amazing as she finds that the ball of Maci's foot and under her toes is the worst for her. So, what does Honey do? She attacks her foot there even more! Danica can't resist tickling anyone that she knows is really really ticklish. Fortuntely for her Honey realizes that she can't wait any longer and she turns it over to Danica. DANICA PLAYS HER OWN GAME BUT CAN'T STAND IT AND RIPS HER SOCK OFF AND RAKES HER NAILS ALL OVER MACI'S BARE SOLE SENDING HER INTO TOTAL HYSTERICS! Maci is going crazy and what's worse the girls are far from done as they double up to torture her bare soles but add in a twist of tickling the foot that the other is holding. Kind of a crossover tickle 🙂 Maci cries out "You guys are so evil!" before moving to her upperbody. HONEY SAYS THAT THEY SHOULD TORTURE HER ARMPITS AND TORTURE THEM THEY DO WHICH DRIVES MACI TOTALLY INSANE! You think that you can't tickle torture someone's armpits when they're in a hogtie? You're wrong. The girls take turns wiggling and worming their fingers into Maci's underarms which is just too much for her to handle! They attack her ribs and tummy very effectively as well before rolling her back over and each girl taking their shot at tickling both of her feet at the same time while the other holds her feet still. To finish her off Honey tickles her upperbody while the evil Danica rakes her soles. Maci admitted afterwards that while is incredibly torturous she, in a weird way, kind of likes it.