TickleCentral – This One is Personal 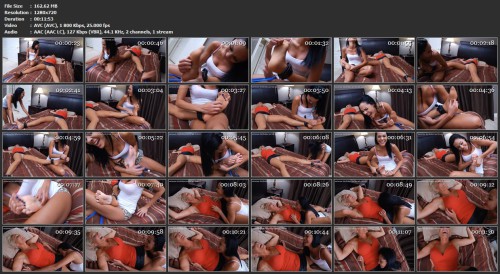 The title says it all and it's 100% true!! This tickling is personal. Danica LOVES to tickle and Mia LOVES to tickle right? Well Danica has been tickle by Mia viciously already. Mia is terrified of being tied and tickled because she so ticklish and being helpless isn't something she relishes. Danica, however, has been a bit upset because knowing how ticklish Mia is just makes her want to tickle her. The fact that she's endured SERIOUS TORTURE from Mia without getting a chance to tickle her back makes her even more upset. So Danica pestered and pestered us to give her her chance at retribution. After a long time of begging and pleading and promising Mia we wouldn't let it get too bad, she relented and said she's allow it just one more time. Danica was told to get her "tickle" on but not to go too far. Well…….Danica doesn't listen too well. When she was turned loose she let out her real, tickle-loving self and boy what a sight it was to behold. DANICA GOES CRAZY WITH THAT EVIL LOOK IN HER EYE AS SHE VICIOUSLY SCRIBBLES, RAKES AND TORTURES MIA'S TRAPPED SOLE!!! Danica was unleashed and she was going to have all the fun she could ever want to have tickle torturing someone she wanted to tickle torture really bad. MIA IS IN HYSTERICS FROM THE FIRST MOMENT UNTIL THE ENTIRE ORDEAL WAS OVER. STOCKINGS AND BARE THE LOOK OF SHEER DESIRE AND EVIL DELIGHT ON DANICA'S FACE WHILE HER NAILS DANCED ALL OVER MIA'S HELPLESS FEET IS AS FANTASTIC AS THE UNENDING LAUGHTER FROM MIA'S MOUTH!! Danica her feet for a VERY long time before she then settled down by Mia's DANGEROUSLY EXPOSED RIBS AND ARMPITS!!! Danica dove into her victims upperbody with glee and didn't want to ever stop! DANICA'S FINGERS DANCED ON MIA'S RIBS AND INVADED HER EXPOSED, VULNERABLE UNDERARMS WITH UNRELENTING TICKLES AS MIA WENT BALLISTIC!! Danica's facial expressions are priceless and Mia's torture wonderous. Don't ever, EVER expect to see this happen again. EVER!!! Not our words……..Mia's