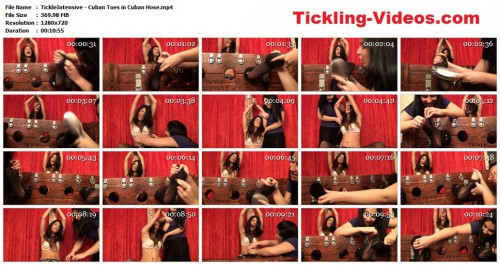 Cuban stockings look best on a Cuban girl, and Marissa proves that rule. Her sensitve size 7 feet look absolutely IRRESISTIBLE in their cuban stockings. Unfortunately for Marissa, Kelli also finds her feet irresistible, and being that she's locked in the stocks, there's nothing she can do to stop Kelli from tickling them! Kelli goes straight for those sexy stocking-clad toes, her fingernails poised like claws. Kelli’s nails WREAK HAVOC on Marissa’s stocking-clad soles – and the way her feet curl and flex in those stockings, you almost can’t blame Kelli for ignoring Marissa’s frantic laughter and desperate pleas for mercy. WAVE AFTER WAVE OF LAUGHTER IS FORCED OUT OF MARISSA AS KELLI TICKLES HER WITHOUT MERCY! The brush tickles even more than fingernails, and when Kelli uses it on her feet, Marissa shows her appreciation by laughing hysterically and struggling like a madwoman! She struggles so much that she winds up smacking Kelli in the face with her foot – BAD IDEA. Kelli doles out some ADDITIONAL PUNISHMENT, keeping the intensity up until Marissa falls into bouts of SILENT LAUGHTER! Marissa’s legs are also ticklish as hell, especially with the stockings on. Kelli really gets her victim screaming by running her nails all over her legs. Then her upperbody is attacked, with Kelli VICIOUSLY tickling the helpless girl’s super sensitive pits, ribs, stomach, and thighs. Marissa, in the grips of intense laughter, alternates between cursing Kelli and begging her to stop – when she finds the breath to speak! But nothing she can say will save her. Kelli is intent on tickling this Cuban hottie until she’s totally wrecked!! This clip is focused on foot tickling with two upperbody segments.