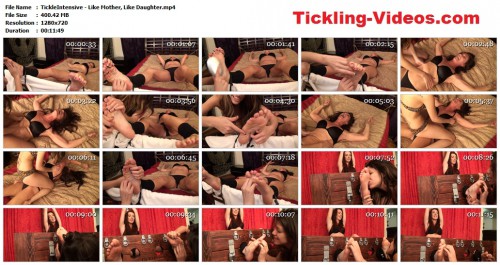 Kathy drove her daughter Melanie and her friend Gina to our shoot. We were originally supposed to shoot with just Melanie and Gina, but after Kathy saw what we were filming, she practically begged us to tickle her! Apparently, she’s done some magazine fetish work back in the ‘80s, and wanted to give fetish work another try. Unfortunately, both mother and daughter didn’t really know what they were getting into, and couldn’t take much tickling. I’ve combined their segments for our first mother/daughter clip! Kathy goes first and she’s definitely the most ticklish out of the two. Strapped to the bed in her bra and panties, Marissa goes after her extra wrinkled size 8 soles with her nails, and the reactions are EXPLOSIVE! She laughs louder and struggles harder than most younger women we’ve had on the bed! Marissa uses mostly her nails, but baby oil and the brush also make an appearance. Kathy’s upperbody is just as ticklish as her feet, and Marissa explores it thoroughly, mercilessly tickling her armpits, tummy, and ribs. You can tell Marissa is on a HUGE power trip from tickling an older woman. Conversely, Kathy absolutely HATES being tickled, but takes it for a total of 7 minutes. Then it’s the daughter’s turn. Melanie is locked in the stocks and, like her mom, stripped down to her bra and panties. She’s only ticklish on her size 8 feet, especially when her feet are licked/nibbled. Marissa gets to tickle the daughter as well, and she starts off licking her toes and nibbling on her tender arches, making her victim beg for mercy. Melanie doesn’t laugh as loudly as her mom but her lungs are quickly drained and she’s gasping for air. She complains several times that she can’t breathe, but her tormentor doesn’t care. After Marissa’s gets her feet really sensitive with her tongue, she attacks them with her nails, getting some good reactions from her victim. But Melanie’s just not cut out for tickle t0rture – she doesn’t last any longer than 4 minutes