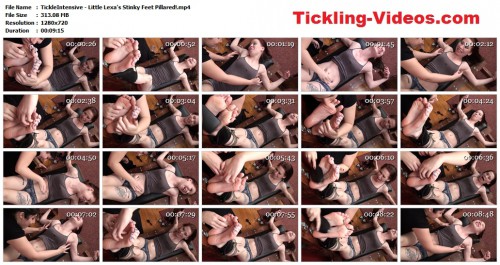 Russian/Chinese cutie Lexa’s come to visit us again, but this time she’s been careless – she’s been on her feet all day and her sensitive size 8s are quite ripe! To Lexa’s embarrassment, she’s been secured in the Pillared position, MEANING HER MOIST SOLES ARE RIGHT UNDER HER TORMENTOR’S NOSE! Kelli doesn’t waste any time – she taunts Lexa about her smelly feet and digs into them with her sharp nails, eliciting desperate squeals of laughter! Kelli secretly LOVES a girl with salty feet – it’s the perfect excuse to tickle t0rture a pair of sensitive soles!! But Lexa doesn’t know that, and between bouts of laughter, she begs for Kelli to stop!! But her cries fall on deaf ears as Kelli has her way with Lexa’s feet, tickling them with her nails and the brush! She even licks and nibbles on Lexa’s toes, enjoying Lexa’s constant squirming and pleading! Of course, her upperbody doesn’t escape Kelli’s wrath – not by a long shot! Lexa’s ticklish pits, ribs, and even her thighs are relentlessly kneaded and squeezed until she’s SCREAMING WITH LAUGHTER!! She begs Kelli, telling her she can’t take anymore, but Kelli just laughs and says “IF YOU HAVE SO MANY TATTOOES WHAT’S A LITTLE TICKLING??” By the time Kelli’s done with her, she’s a sore, sweaty, gasping mess!!