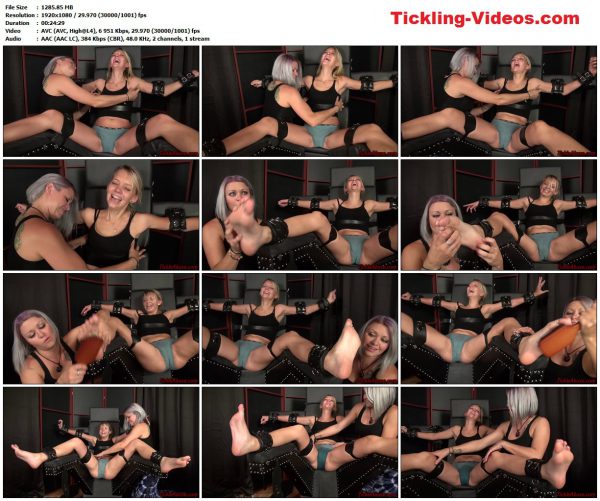 Catherine used to date MJ years ago and she was constantly sneaking in a quick tickle here and there whenever MJ’s guard was down. Since then they have remained friends so when Catherine offered her a chance to get paid for getting tickled, even though MJ was skeptical, she trusted Catherine and decided to let her have another shot at tickling her. The deal was that she was supposed to be tied down and tickled for 5 minutes. Once Catherine had MJ in her clutches she told me to keep filming until she gave me a signal to stop. Slowly five minutes became ten, then fifteen. After a while, MJ’s laughter was barely audible as the poor girl was simply exhausted from laughing more than she ever has in her life. Weak and overwhelmed by the skillful tickling Catherine administered, MJ continued laughing for nearly a full minute even when Catherine was no longer touching her. When Catherine started tickling MJ again you can see the fear and agony in her eyes as she begins begging her ex-girlfriend to stop tickling her. Several minutes later, Catherine actually manages to tickle MJ until she pees all down the chair. Embarrassed and unable to stop laughing, MJ tries to beg for mercy but Catherine continues jumping from spot to spot, catching MJ off guard and keeping her forcefully laughing all the while. I thought MJ would be in tears by the end of this video but perhaps she was just to exhausted to cry after the toll her ticklish ordeal put her through. Her silent laughter more than made up for it anyways.